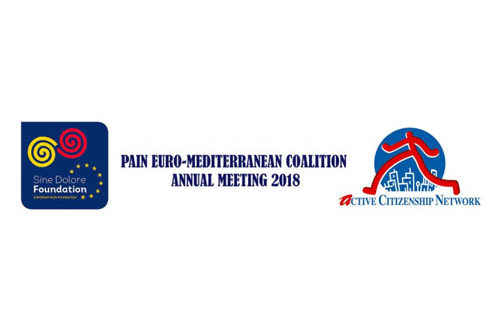 Last 6th of May 2018, in the framework of the IV edition of the “SINE DOLORE WORLD PARK, Sine Dolore European Pain Foundation and Active Citizenship Network promoted the event “Making visible the invisible on Chronic Pain: sharing successful experiences from Spain to Europe”. This event followed a relevant initiative at EU Parliament realized on April 26th called “From local to global: promoting societal impact of pain “SINE DOLORE WORLD PARK” when the above mentioned associations cooperated together to present for the first time at EU level the unique theme park in the world against pain and for the quality of life.

Both initiatives testify the high level of commitment on chronic pain by many actors in Spain.

In particular, the aim of the initiative carried out in Menorca last May was to facilitate the exchange of experiences among managers/operators of good practices in the area of chronic pain -gathered across Spain- and to explore how to promote these win experiences at EU level.

The European and international perspective was guaranteed, apart the organizer Active Citizenship Network, by representatives of Pain Alliance Europe (PAE) and World Federation of Incontinence and Pelvic Pain (WFIPP).

The impact of pain in the society was also underlined by a cultural approach thanks the author of the book “Inevitable como la vida. Cuando el dolor se llama fibromialgia”.

For participants, the meeting was also the opportunity to reflect on the challenges of pain care and management in Spain.

About it, it was nice to know that last June 26th it was launched the national Societal Impact of Pain (SIP) in Spain, following the experiences in other countries, such as France and Malta.

At the same time, it was strange to note the limited number of actors and experts involved.

We, the undersigned associations, in line with our commitment on chronic pain, confirm the interest to play an active role in the national Societal Impact of Pain (SIP) in Spain, and so we hope to be officially invited for the next meeting scheduled within the end of the year. And Sine Dolore European Pain Foundation would be honored to host the meeting of the SIP Spain in the framework of “SINE DOLORE WORLD PARK”.